Awesome voice over work from Brian Albury and Liat Reina!
Tony wrote the story-line, and directed. I filmed and edited. The filming was done in Second Life, and it was absolute fun to do. We ran into many problems, I remember the frustration as Tony and Judi Newall (who handled the dragon avatars) would position their avatars in a straight line, but I would see them pointing sideways. I saw the dragon distorted in crazy positions, while they both insisted the dragon was flying around and looking fine. My recording software (Fraps) ate the frame rate, and the scripts caused lag, it messed up my camera view – and as I am the camera, what I see is what will be on the film…. I ended up clearing cache and logging out and back in, at least 15 times an hour, to get maybe 8 seconds of good film. It all came together when Markus Parker-Rhodes (yes, the Monty Pythons Flying Circus animator) created the scripted breaking glass prop for us. Ok, the glass would break too soon or too late, but we got it in the end.

We submitted the film for the Superbowl Doritos Contest in 2011, and it was disappointing to hear we didn’t make the selection. We published it anyway, under the title: Dad saved the Day.

I found the original files when clearing one of my hard-drives, and decided to have another go at it. Tony, I hope i did justice to the film 🙂 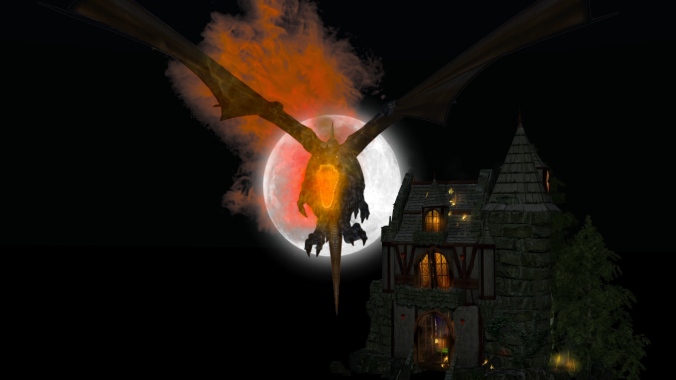